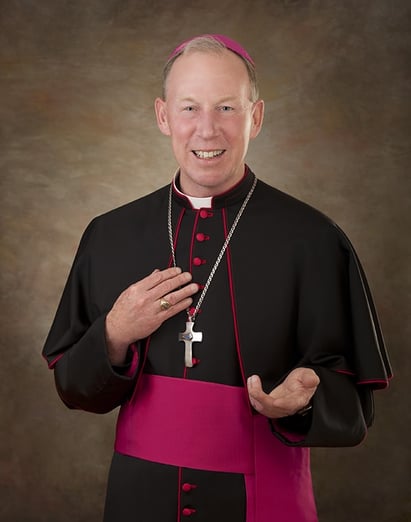 Most Reverend Gary Michael Gordon was born on June 10, 1957, in Vancouver, British Columbia. He attended Christ the King Seminary in Mission, British Columbia; Resurrection College in Waterloo, Ontario; and St. Peter’s Seminary in London, Ontario, where he graduated in 1982. Bishop Gary was ordained to the priesthood on May 22, 1982, by Archbishop James Carney at his home parish, St. Francis de Sales, Burnaby. On June 14, 2014, Pope Francis appointed Most Reverend Gary Gordon as the 17th Bishop of Victoria.

Since his ordination, Bishop Gary's love of nature and connecting with his congregation, especially with First Nations communities, developed a lifelong bond with the Stó:lō Nation. Embodying the model to Authentically Witness Excellence, his adventurous, outgoing spirit, and gift of storytelling endeared him to the community. Shortly after being appointed Bishop of the Diocese of Whitehorse in 2006, in honour of his evangelising and connecting with the people, Bishop Gordon received the name Xyolhmetoxw, which means ‘taking care of the people’ in Halq’eméylem, the language of the Stó:lō Nation.

In November 2014, when Bishop Gordon was appointed Shepherd of the Diocese of Victoria, he continued to personally engage, accompany, connect, model, and mentor, encouraging his staff and clergy to follow suit. Bishop Gordon guides and teaches in his own special, personal, and unique way—whether it is creating sandboxes as a prop to explain the complexities of Truth and Reconciliation to Grade Two students, working with inmates, victims, and families through Restorative Justice, or simply connecting with people on their own terms while fishing.

Merlin, Bishop Gary's Golden Retriever, was born in 2011, and vaulted to puppyhood stardom in the movie Spooky Buddies, part of the Disney Buddies franchise, sometimes referred to as the Air Bud and Air Buddies franchise. Merlin played the part of Buddha, the mischievous puppy, and was gifted to Bishop Gary upon completion of filming.

Bishop Gary was then Bishop of Whitehorse, and Merlin grew up roaming the wilds of the Yukon. On three separate occasions, Merlin defended the Bishop from bears, a ‘hat-trick’ that earned him the honourary title ‘St. Merlin’.

Merlin loves his role as Diocesan Dog, and when possible, accompanies Bishop Gary on his travels. He loves people, food, chasing balls, and car rides, and can often be found visiting the Pastoral Centre staff, or welcoming guests to the Bishop’s residence.

At this time, Merlin anticipates no further movie appearances (although he was a mostly invisible, if not silent, guest in the Bishop’s 2016 Christmas video).

Send a message to Merlin