Please submit your application by July 15 to

CRITERIA
ITEMS TO COMPLETE AND SUBMIT

To apply for the Jawl Bundon LLP bursary, please fill in the form below.

All fields are required.
The form will not submit if any fields are left blank, or if a supporting document is not uploaded.

The Diocese of Victoria is now administering the Blessed Marie Anne Blondin Bursary which was established by the Sisters of St. Ann in honour of their foundress.

Please submit the above by July 15 to:

To apply for the Blessed Marie Ann Blondin bursary, please fill in the form below.

Please submit the above, by July 15 to

To apply for the Jawl Bundon LLP Bursary, please complete the form below.

CWL AND KNIGHTS OF COLUMBUS BURSARIES

$750 Bursary awarded annually to a Catholic student graduating from a secondary school or a home schooling program within the Diocese of Victoria who plans on pursuing further education at a post secondary institution. Applications are available from Secondary School Counsellors or parish CWL members. Application deadline: April 15.

$500 Bursary available to any Catholic son and/or grandson or daughter and /or granddaughter of a Catholic Women's League member who is involved in and/or entering the field or arts and culture. Applications are available at: https://bcyukoncwl.com/resources/bursaries. Application deadline: March 31.

The Bishop Thomas J. Lobsinger OMI Memorial Bursary is available to all Catholic students residing in the province of British Columbia, Canada.

Application information may be found on the Knights of Columbus' website: www.kofcbc.org.

Deadline for application is June 30.

This Bursary is available to a practicing Catholic who is involved in their parish community, and is facing family difficulties or financial hardship. Applicants should demonstrate strong academic marks and experience in community involvement and volunteer work. This will be awarded to a full-time student at a post secondary institution, college or trade school.

The Bursary is for $2,000 per year, renewable up to three additional years, based on need.

To apply, please submit a one-page essay (maximum 250 words) stating you career objectives, accomplishments, community and volunteer involvement, and describing why you require financial assistance. The essay may be emailed to Fr. William Hann, Holy Cross Parish, or mailed to:

One or more Bursaries are awarded to full or part-time undergraduate single parents who are members of Holy Cross Parish studying at the University of Victoria. If there are no single parent applicants from Holy Cross Parish, the Bursaries may be awarded to students who are members of Holy Cross Parish. If there are no students who meet the previous criteria, the award may be given to any single parent student. Application for the Joseph B. Jackson Bursary may be made on-line to Student Financial Aid Services at the University of Victoria. Selection will be made by the Senate Committee on Awards. Further information may be found at http://uvic.ca/registrar/safa.

The Parishioners of Holy Cross Catholic Church established this Bursary Endowment Fund in 1994.  The recipients(s) of this annual bursary will be enrolled full time in a Diploma or Credit Program at Camosun College maintaining a satisfactory academic standing.  The recipient(s) should be a resident of Greater Victoria or the Southern Gulf Islands.

Preference will firstly be given to single parents who are members of Holy Cross Parish, and secondly, to other Roman Catholic Parishes in Greater Victoria or the Southern Gulf Islands. If there are no successful applicants the bursary will be awarded to any student in any program on the basis of financial need and satisfactory standing. Application should be made online directly with the Financial Aid office in September or January. Click on the Holy Cross and/or other Roman Catholic Parish checkbox.

The web site is:

Donations will be gratefully acknowledged and may also be made in the name/memory of a loved one. Donations are eligible for the Charitable Tax Credit and may be made directly to UVic or Camosun or through Holy Cross Parish. 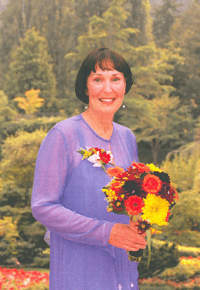 The Diocese of Victoria and Island Catholic Schools is pleased to announce the establishment of the Char Deslippe Memorial Endowment Fund to provide an annual award in Char's honour.

Annually, $500 will be awarded to a teacher working for Island Catholic Schools or a catechist serving in a parish within the Diocese of Victoria, who displays outstanding dedication and commitment to religious education, and handing on of our faith.

Nominations will open in April 2019. Start thinking of a teacher or catechist who displays outstanding enthusiasm and creativity in passing on the Catholic faith! Parish and school communities within the Diocese of Victoria are invited to consider and submit names of teachers or parish catechists to the Diocesan Award Committee for consideration. The award recipient will be announced at a Diocesan event.

Donations to the Memorial Fund are now being accepted. More than $5,500 has been donated already!

(Select Char Deslippe Endowment Fund from the drop down menu.)

To nominate a teacher or catechist,
please scroll down to the form below.

An outstanding innovative and passionate life‐long educator, Char Deslippe (1939 ‐ 2018) was a master teacher who began teaching high school at the age of 19. Over her career Char taught all ages and at all levels, from elementary pupils to university students.

Having obtained her B.A. in History and English, Char began her teaching career in Iowa as a young Religious, as well as continuing to study at Loyola University in Chicago. She would go on to earn a Master’s degree in Religious Education from the University of Detroit, and following discernment, decided to leave religious life with the blessing of the Community. Following her marriage to Bob and moving to Alberta, Char continued her studies at the University of Calgary, becoming certified by the Alberta Department of Education, she taught with Bob at Father Patrick Mercredi Community High School in Fort McMurray while raising their two daughters.

Char then relocated to Victoria with her family following her Principal, Peter Hobbs, who had been hired in Victoria as Superintendent of Catholic Schools. Char then began what was to become a twenty‐year dedicated commitment to Island Catholic Schools and the Diocese of Victoria.

Char’s influence on catechetics and Catholic education in the Diocese of Victoria and beyond is truly remarkable. In addition to teaching over the years, Char was responsible for developing Diocesan Family Life and catechetical curriculum for the elementary and secondary levels; writing religious education curricula for the provinces of Alberta, Ontario and British Columbia; developing a liturgy manual for Island Catholic Schools; leading high school students on a number of Habitat for Humanity projects; coordinating and leading World Youth Day participants; and teaching courses for St. Mark’s College at UBC. Taking a leave of absence for a year, Char and Bob also served as missionary teachers at St. Joseph’s School in Keren, Eritrea with the Del La Salle Brothers.

Over the years, Char coordinated a number of committees at the Diocesan level, served on the Board of Directors for Island Catholic Schools, served on provincial and national teaching and religious education committees, co‐authored a world religions textbook for the Alberta Government, developed, and was the recipient of numerous awards and honours including the Benemerenti Papal Medal for service to the Church.

Char was known for her engaging, outgoing personality, her devotion to the Faith, to the Church and to Catholic Education. She displayed remarkable energy, enthusiasm and generosity, was dedicated to and disciplined in her craft, and was inclusive and passionate about those she taught and with whom she worked.

To recommend an ICS teacher or parish catechist for the Char Deslippe Memorial Award, please complete the form below.