Bishop Gary recently presented two awards - the Blessed Marie Anne Blondin Bursary to Michaela Pomponio, and the Char Deslippe Memorial Award to Tanya Taft. In non-Covid times, these awards are celebrated at diocesan gatherings, but this ceremony was a quiet one, witnessed by only a few. Nonetheless, it’s heartwarming to know that two amazing women were recognized for their faithful service. Michaela and Tanya have answered the call to serve, following in the footsteps of the two women for whom these awards are named.

Connected like lights on a string of Christmas bulbs are four stories. The first is an old one, and part of the pioneer history of Victoria. Actually, it begins in Lower Canada (yes, before Canada was a country) in 1809. Esther Blondin was born in Terrebonne, Quebec, into a large Catholic family. Girls in these times rarely attended school. However, by all accounts, Esther grew into a determined, intelligent young woman. She learned to read and write while serving as a housekeeper for a local convent, the Congregation of Notre Dame. As her education deepened, so too did her faith.

In 1858 (the Gold Rush days), the Bishop of Victoria wrote the Sisters of St. Anne, asking for help, and bravely they came. Mother Marie Anne was not allowed to join them, but she supported the Sisters by writing letters of encouragement. She died in 1890 and was declared Blessed in 2001.Esther Blondin rapidly progressed from student to teacher, and began to instruct children in a parochial school. She must also have been a woman of considerable vision because, in 1848, she convinced the Bishop of Montreal to support her idea of founding the Sisters of St. Anne. Taking her vows with five companions, and choosing the name Sister Marie Anne, Esther began to lead her small community. Soon, she had attracted a small army of women, committed to providing education and health-care, especially to those in need. Of all the many challenges that must have plagued her, one notable event stands out. Her bishop relocated her convent, and assigned a new chaplain, one with a very different vision. What is politely described as ‘conflict’ ensued. Mother Marie Anne was asked to step down as leader and demoted to work in the laundry. Convinced she could still support her community, she stayed in this humble position, working alongside the newest novices. She spoke openly and honestly about her unjust treatment, but more importantly, she continued to urge the sisters to provide sound, faith-based education to all children, especially to the poor. Those who knew her were moved by her prayer life, her deep devotion to the Eucharist, and her authentic relationships.

Appropriately, this year’s recipient of the Blessed Marie Anne Blondin Bursary is Michaela Pomponio. Michaela has earned a degree from Royal Roads, with top marks in her Justice Studies program, and has been accepted into the Allard School of Law at UBC. Michaela has taken up the torch of social justice, volunteering at the William Head Federal Penitentiary with the John Howard Society’s Visitors Group. She describes this as a way to “care for and try to heal the children of God who have lost their way.” Michaela echoes the call that Esther Blondin responded to so many years ago; she seeks to serve marginalized people.

It is perhaps no coincidence that Michaela is an alumnus of Island Catholic Schools (ICS), and has benefited from the work of yet another inspiring woman - Char Deslippe. After completing her degrees in History and English in Iowa, Char began teaching, a task she continued until her last day. Most ICS staff remember Char as a great teacher of teachers. During her twenty years of service in our Diocese, she joyfully spread the good news, guiding catechists and teachers in their vocation. Char’s energy and passion for Catholic education was astonishing and wide reaching. She served on numerous committees - at local, provincial, and national levels. She developed programs, wrote curriculum, led charitable projects, and even served as a missionary with her husband Bob. But to people who knew Char, she was mostly an authentic friend. She loved to learn about others. She’d celebrate with you in happy times and support you intough ones. Char is deeply missed by all who knew her, at Holy Cross Parish, and in the ICS community. 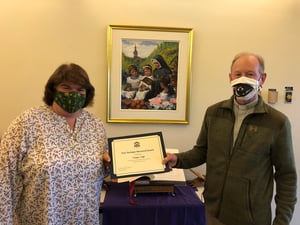 One of the people who knew and loved Char is also the latest recipient of the Char Deslippe Memorial Award, Tanya Taft. Certainly one of the most beloved teachers on the staff at St. Andrew’s High School, Tanya has been a true beacon of light for over thirty years. She teaches some of the most challenging courses in high school, Calculus and Physics, classes not normally connected to religious education, and yet she is able to connect math and physics to faith in a real way. She also designed and instructs one of the most popular courses in grade 12 - Science and Religion. Students often talk about the amazing discoveries this class brings them. They learn about the nature of the universe, the bridge between faith and science, and see themselves and their lives in a new way.

Tanya recognizes every one of her students as beloved children of God, and she patiently, quietly leads them to His light. Perhaps the best way to describe Tanya’s impact as a catechist is to describe the ‘candle ceremony’ at St. Andrew’s, coincidentally a tradition begun by Char many years ago. All of the grade 12s are assembled in front of the altar. Each in turn receives a glowing candle, symbolizing the light of Christ. As a school community, we pray for them and hope that they carry Christ’s light into the world. For decades, Tanya has organized this ceremony.

In a way, this simple school tradition reminds me of all four of these stories. Each of these women has received a light, and has passed it on. All have sought education and have used what they have learned to serve others; each has courageously faced obstacles and taken on challenges; and each has worked humbly, out of a pure love for God. These are the types of lives that often go unsung, and yet they are heroic. These are the lights that guide us all on our way. And knowing that they have been recognized this year is very good news. Well done Tanya and Michaela. Keep shining! 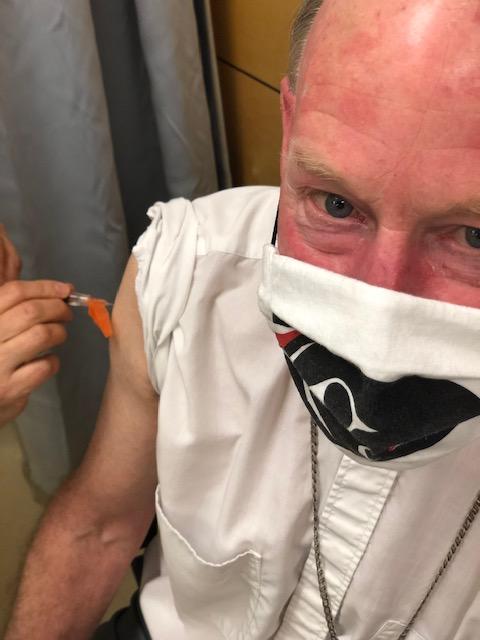 Who is that masked man??

It’s a happy day for the Diocese of Victoria – Bishop Gary received his first Covid-19 vaccine dose this ... 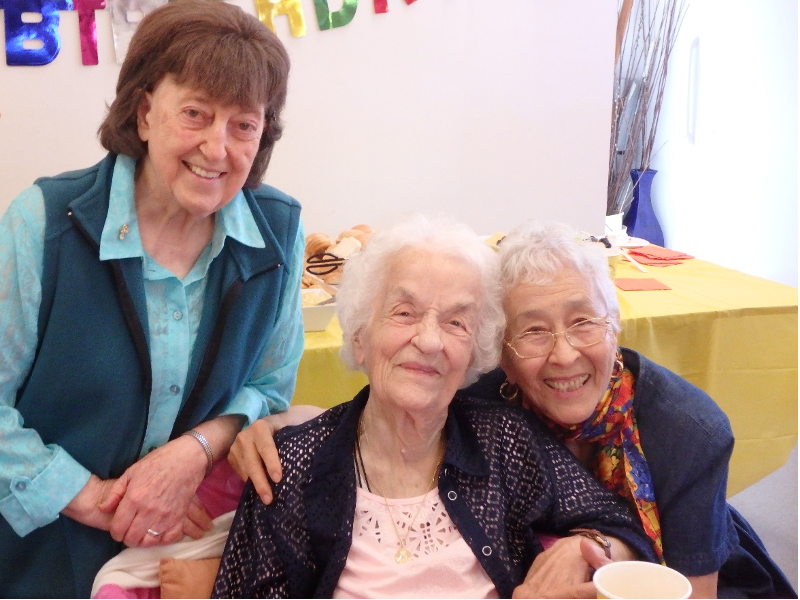 Bishop Gary Gordon introduces us to the newest member of his family! 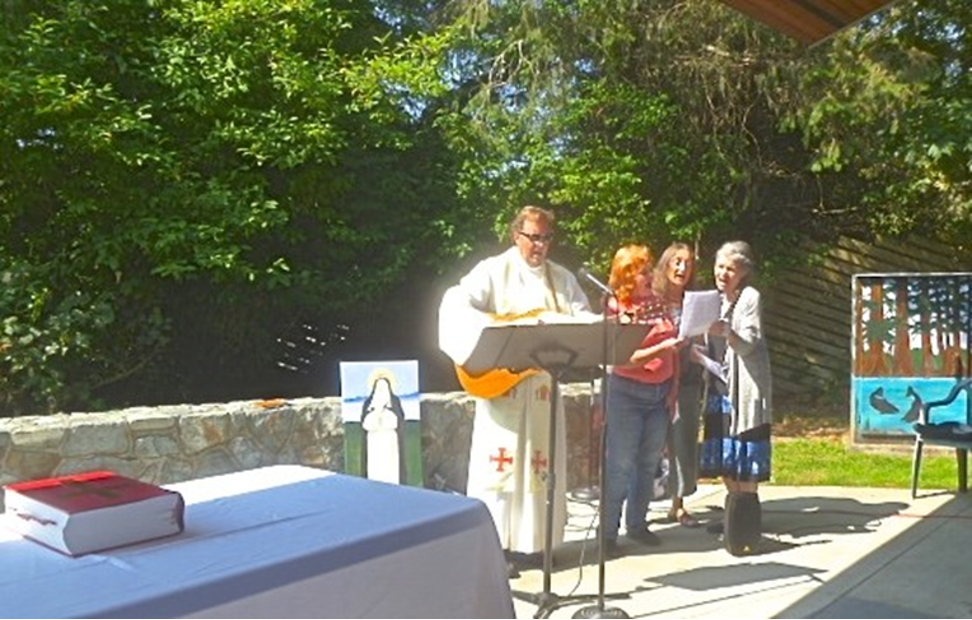 The official Sooke website describes the town as the place ‘where the rainforest meets the ocean.’ Certainly, ...